Confessions of a rebel with a cause 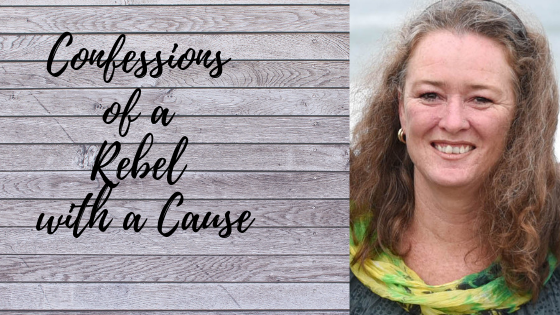 What is a confession – or an admission statement. And what does that have to do with me?

Where does one start, how deep do you go and how personal do you get? Are you ready for a shitstorm, being attacked on social media or privately?

Who gives a sh*t anyway? OOOHHH, this is going to be interesting, this confession.

The list of attack is endless when it comes to making a confession. So why am I? Well, I’m a rebel with a cause – so what, you might ask. It does actually make sense, though, in my line of duty, which I will illustrate later.

As a kid, as far back as I can remember, I was a little rebel. Then I became a bigger rebel and then a real big rebel. But then one day I decided to try to become a “normal” human being.

My first memories of being a rebel are at about the age of three. My mom had probably told me to do something and I thought – I don’t think so. I packed my little brown suitcase and walked out the door. I was leaving home. Or so I thought. Anyways, off I marched, down the road on my way to ?. I didn’t get very far. About 200 metres down the road there was a house with two huge dogs –  alsatians!. As I approached the garden gate they started barking loudly and aggressively. Oops, maybe I didn’t want to leave home at all. I don’t remember how I got home, but I obviously did as the next years were spent there. Little brown suitcase – the closest I could get to the original – I don’t have photo’s of it from that time.

The ice cream man and another occasion to break out.

At school there was this ice cream truck or bicycle dude that used to sell ice creams during break. I must have been about 8 or so at the time. My mom always used to pack a sandwich for snack break and never would give me money for an ice cream. I decided to take matters into my own hand. Ice cream trike ala those days

I plotted out a plan and engaged the help of a friend. We went round the neighbourhood, house to house, and sold tickets to an imaginary ballet concert on the weekend. All they needed to do was give me 10 or 20 cents upfront and then pick up their tickets at the event. Every person, that was home, gave me a small amount and at the end of the afternoon I had a little plastic bag full of coins. I obviously hadn’t thought further than the tip of my nose, because next morning my mom put my sandwich in my little brown suitcase, and discovered my treasure. Can you imagine what happened next?

Well, I had to go back to every single one of my sponsors and give them back their donation. How embarrassing that was? And then, I was late for school and my mom got the teacher to come out of class. To top it all she explained to her why I was late for school. OMGosh. That was even more humiliating.

Lesson learned? As far as that was concerned, yes. BUT, that wasn’t the end of my rebellious days.

I’m going to leave it up to your imagination what kind of trouble I got into as the years went by. I’m not going to tell you though, yet (maybe never), as my kids might read this and pick up ideas – and we’re not going there…

Another part of the “rebellion” as a young adult was to leave home at the age of 21 and travel through Europe. With nothing more than a backpack, CHF 500, a return ticket to southern Africa and an initial starting point in Switzerland – off I went.

Being in a foreign country, not speaking the language or knowing the culture it was important to fit in and not feel like an outsider.

At some point later during my travel adventure, learning the language and trying to adjust to a different culture and mentality, I met my husband. We got married and had kids (long story short). That was the start of a new challenge in life. Grow up, become an adult, be responsible, do what society expects of you, don’t rock the boat. Be grounded, complaisant. At the same time hold a good job, run a household, be a good mother, wife and and and ……

And with that losing my own identity – or was it?

Learning the language, looking back now, was the easiest part of the puzzle.

So what does this have to do with me in today and here?

Now, over 8 years ago, we were living on a smallholding out of town and I was feeling lost and insecure. Not knowing what my purpose was, having kids with issues, I decided to look into broadening my knowledge which led to another outlook on life.

I started studying Kinesiology which led to learning Hypnotherapy. Which in turn led to doing all sorts of extra courses – in the search of “my identity”. Looking for the person I used to be. Gone were those days, but, the future held potential.

Over the last 9 years my life has changed a lot. What is a lot? Well, I have learned the importance of self care, self love and believing in my capabilities. Not that I also do what I know I should – i.e. get the right amount of sleep, exercise regularly, regular healthy meals, less stress etc etc etc.

A rebel is a person who stands up for their own personal opinions despite what anyone else says. A true rebel stands up for what they believe is right, not against what’s right. According to the Urban dictionary.

Now don’t get me wrong – there are a million other definitions, explanations and illustrations of what being a rebel means. Not all are positive. I’ll stick with the one from urban dictionary for the moment.

For me that means not compromising my individuality or opinion. Being honest about what is important for me. “Taking back” my identity which is always a work in process – i know that is sooooooooo generic. Helping other women to regain their inner strength and do what they believe in, or find a way to embrace their future in a different way.

The reason for this confession is to inspire and encourage who ever else is feeling the same to step out and reclaim their rebel.

Another confession… I’m not going to confess all my rebel acts, as that will definitely either:

It’s never too late, but never early enough to realise that being a “rebel” can also mean taking responsibility for YOUR life. If you aren’t happy, how can you be of service to anyone else, whether children, partner, parents, colleagues or co-workers.

So there you have it – my Geständnis…

Oh and BTW – I invested in a great book: The subtle art of not giving a f*ck by Mark Manson
Maybe subject for a review in the future. The subtle art of not giving a f3ck

To read more about me, go here

This site uses Akismet to reduce spam. Learn how your comment data is processed.