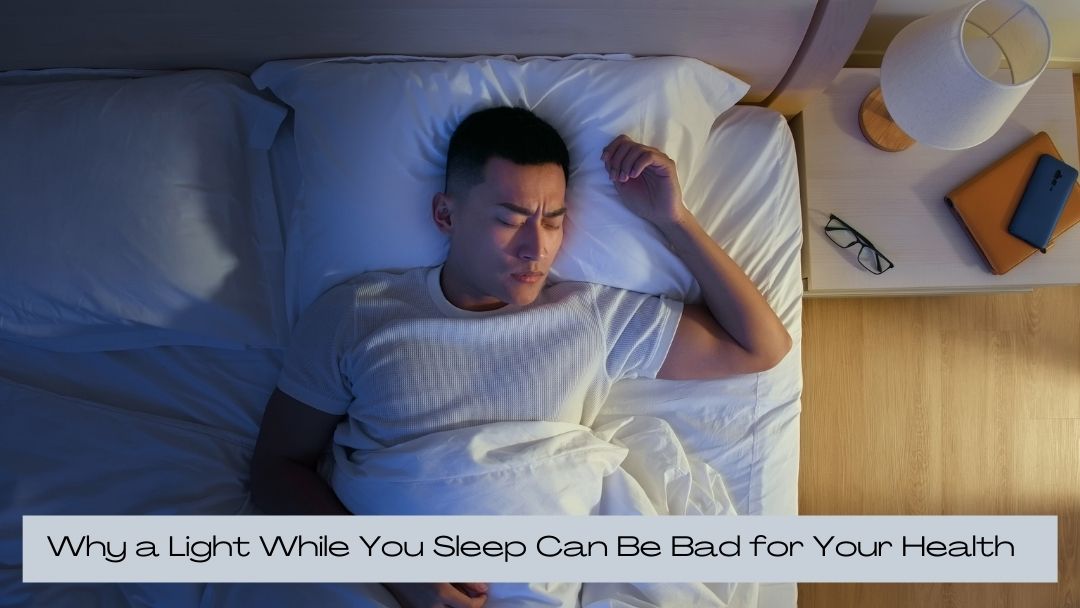 Researchers from Northwestern University released data from a study that showed even moderate amounts of light exposure at night could have a negative impact on your health.1 In a press release, researchers report that up to 40% of individuals sleep with a light on, which could be a bedside lamp or the television.

However, this estimation does not appear to include the ambient light that comes through your window from streetlamps and other outdoor lighting. This means that many more may be affected by the results of this study.

Exposure to light at night is a relatively recent phenomenon after the invention of electric lighting. Until then, people commonly went to bed at sunset and got up when the sun rose. Scientists have been studying the alterations in your sleep patterns as a result of present-day night lighting that can have a significant impact on your health.

For many years it was widely accepted that sleep was a mystery and potentially little more than a waste of time.2 Modern research has shed more light on the matter and demonstrated that sleep is a crucial component to your healthy lifestyle.3

A negative impact on sleep quality or quantity can have far-reaching consequences, affecting a wide variety of systems from your mood, creativity and brain detoxification4,5,6 to DNA expression and dementia.7,8 Sleep deprivation slows your reaction time and increases your risk for accidents.9 Getting less than six hours of sleep leaves you cognitively impaired.

Even a single night of sleeping only four to six hours can impact your ability to think clearly the next day. In 2021, the National Highway and Transportation Safety Administration (NHTSA) reported that drowsy driving causes 100,000 car crashes each year and kills 1,500 people.10

As noted by the featured study, sleeping in a room with even a small amount of light can negatively impact your metabolism and overall health.11 If you combine nighttime light exposure with an inadequate amount of sleep, you’ll be exhausted as your body struggles to maintain homeostasis.

Fortunately there is an easy and inexpensive solution. For the lights you keep on after sunset you can replace them with red light bulbs as red light does not suppress melatonin. Ideally the bulbs should not have any flicker. I found some on Amazon that are relatively inexpensive and these are the only bulbs I use in my home after sunset.

Researchers found that just one night of sleeping with light in your room can launch a domino effect, affecting your level of melatonin, insulin resistance, heart rate and heart rate variability.12 The research was published in the Proceedings of the National Academy of Sciences (PNAS).13

The team studied 20 healthy people in their 20s and tracked the impact light had on their biological clock, melatonin levels and metabolism. The participants spent two nights in a sleep lab. During the first night, each one slept in a darkened room. On the second night, some slept in a room with a dim overhead light, which simulated streetlights coming through a window or a dark cloudy day.14

Data, including brain waves, heart rate, EKGs and melatonin levels, were collected throughout the night from each of the participants with as little interference as possible. The researchers used long IV tubes to collect blood samples, so the participants were not awakened.

“We recorded the brainwaves and could tell what sleep stage the person was in. We recorded their breathing, their heart rate, their EKG, and we also drew blood from them to measure melatonin levels while they were sleeping.”

Results of the study showed that the participants’ heart rate rose higher than expected during the night when they were exposed to light. Another researcher, Dr. Daniela Grimaldi, commented in a press release:16

“Even though you are asleep, your autonomic nervous system is activated. That’s bad. Usually, your heart rate together with other cardiovascular parameters is lower at night and higher during the day.”

Similarly, the data showed that the participants who slept in a lit room had higher insulin resistance the morning after as the body secreted a higher amount of insulin to normalize glucose.17 Past research had shown that people who slept exposed to light at night were more overweight and obese. The current study may help explain how exposure to light impacts your ability to regulate glucose.

Despite the consistent concrete objective data, the participants subjectively were unaware of the changes. The researchers tested sleeping in moderate light and dim light over a single night. They discovered that moderate exposure increased the alert state, in which the participants experienced increased heart rate and force of contractions.

“These findings are important, particularly for those living in modern societies where exposure to indoor and outdoor nighttime light is increasingly widespread,” Zee said. “If you’re able to see things really well, it’s probably too light.”18

Your body runs on an internal clock known as your circadian rhythm. When this clock is messed up, your cells are exposed to an unusual amount of stress. Many of the health conditions attributed to the biannual time change are because these internal clocks are not easily reprogrammed and are synchronized to a 24-hour cycle of light and dark.19

Researchers have demonstrated that when you are exposed to light at night, a time when your body expects it to be dark, physiological changes happen. Another system responsible for regulating your internal clock is located in the hypothalamus. It is called the suprachiasmatic nucleus (SCN) and it functions through hormones and chemical signals that regulate your sleep-wake cycle.

This influences the regulation of other physiological activities, which include your core body temperature, neuroendocrine function, memory and psychomotor activity.20 Based on signals of light and darkness, your SCN tells your pineal gland when it’s time to secrete melatonin — promoting sleep — and when to turn it off.

In other words, just going outside for half an hour at lunch could give you most of the anchoring light you need to maintain a healthy circadian rhythm. On the other side of the day, you need to avoid bright artificial lighting after sunset.25 This can lower melatonin production and affects sleep quality. Using room light during your usual hours of sleep will suppress melatonin by more than 50%.

Melatonin is best known as a natural sleep regulator that functions alongside your circadian clock. Yet, melatonin also has many other important functions in the body.26 Notably, it plays an important role in cancer prevention27 and may help prevent autoimmune diseases such as Type 1 diabetes and inflammatory bowel disease.28

Melatonin is versatile and a powerful antioxidant that helps increase glutathione,29,30 which plays a significant role in detoxification. It also has anticonvulsant and antiexcitotoxic properties,31 and is a potent antioxidant32,33 with the rare ability to enter your mitochondria,34 where it helps prevent mitochondrial impairment, energy failure and the death of mitochondria damaged by oxidation.35

It’s shown to play a role in viral and bacterial infections36 and as recently as June 2020, researchers suggested it could be an important adjunct to COVID-19 treatment.37 In late 2021,38 a commentary discussed an October 2021 study39 that found melatonin significantly lowered mortality from COVID-19 when given to severely infected patients.

But this wasn’t the first time that melatonin has been highlighted for the ability to prevent and treat sepsis. A 2010 paper40 noted that it helps prevent and reverse septic shock symptoms and a 2014 study41 showed that melatonin accumulates in the mitochondria and has both antioxidant and anti-inflammatory activity that could be useful in the treatment of sepsis. It later became part of critical care physician Dr. Paul Marik’s protocol for the treatment of sepsis.42

Vitamin D is also involved in the pathways that produce melatonin in the pineal gland.43,44 An evaluation of clinical trials and correlation studies have shown that “Vitamin D has both a direct and indirect role in the regulation of sleep.”45

Tips to Reduce Light at Night

Researchers have also addressed the issue of light at night as it affected outcomes from COVID-19. They found that people who were exposed to ambient light at night had an increased risk of infection, including COVID. They found a strong connection in New York and Connecticut in cities with the highest intensity of light at night. Lead scientist Yong Zhu, Ph.D., from Yale School of Public Health, commented in a press release:46

“These findings suggest that repeated and prolonged exposure to artificial nighttime light could play a role in COVID-19 incidence. We are just beginning to understand the role of circadian rhythms on health, and this is further evidence that a connection exists.”

The current study is one in a long list that has demonstrated the negative effects of sleeping even in a dimly lit room.47,48,49,50,51,52 Consider making these changes to lower your nighttime light exposure:53